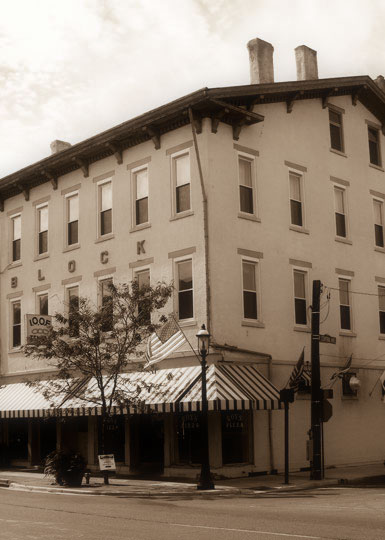 There is a special distinction that belongs
to Miamisburg and Miamisburg alone.
Miamisburg is the sole city of that name in the WORLD.

There is no other.

It began over 200 years ago when Zachariah Hole established Hole’s Station on the west bank of the Miami River. Settlers continued to arrive from Pennsylvania and among them were four men, Emanuel Gebhart, Jacob Kercher and Dr. John and Dr. Peter Treon who, on February 5, 1818, offered for sale at “Public Venue 90 lots in a new town by the name of Miamisburg.”

Completing the settlement was a schoolhouse, built by subscription and which also served as a meeting house for the Lutheran and German Reformed congregations.

Highlights of history: the town was incorporated on February 11, 1832, the first election of town officers was held that year. And just 100 years later in 1932, the town received city status with 5,000 population. The first post office was established in 1822; the volunteer Fire Department in 1843, the public library in 1910. The current newspaper, The Miamisburg News, was founded in 1880.

Transportation across the river was provided by a ferry until 1827 when a toll bridge was built with a second in 1859. Also playing key roles in the area’s development were the Miami Erie Canal, completed in 1829; the Great Miami Turnpike completed in 1840, and the C.H.&D. railroad in 1851.

Today, Miamisburg is a progressive, small city of 19,500, with all the amenities found in larger communities: a modern, expanding hospital; an active Senior Citizen Center; a recreation department serving the recreation needs of citizens with a large municipal pool, two golf courses, neighborhood parks, tennis courts and a bikeway. There is an aggressive thrust toward redevelopment of the downtown area — and that also continues.

And so Miamisburg remains. The past has become the present and the future.

And Miamisburg is still — the only city in the world with that name.

We reserve the right to limit the delivery area and the amount of the order.